Hello,
This is a music blog. If you like what you read, I have more reviews at www.toneandgroove.com

Christopher Owens is the lead singer and songwriter of this band. He has a quirky voice and can sing the high and low end at the same time. His lyrics seem to describe confusion and frustration as a way of life, until he realizes at the end of the album that he doesn't have to live like this. Musically, this is sweet sunny, loopy pop, and it's the music that makes this album so much fun to listen to. He's never angry or bitter, but just wonders what's going on, and trying to get a handle on the women he wants to date. This is an album to think by, or with the windows open on a warm spring day. [www.myspace.com/girlssanfran]
Andrea Weiss

Spektor’s piano playing is fun, quirky, and light but not light weight. Her lyrics are thoughtful, smart, and a little odd whether she is singing something sad, like “Eat,” happy like “Human of the Year,” sweet and whimsical like “Folding Chair,” or strange like “Genius Next Door.”

“Wallet” is a tale of a woman who finds a wallet, and takes it to the nearest Blockbuster so that it can be returned to it’s owner anonymously, is the happy, sweet, and oddball side of Spektor. “Laughing With” is sad, smart, thoughtful, and brims over with emotion. The song is about the reasons why people turn to God.

An album with such heartfelt emotion, direct clear lyrics, music that grabs and holds throughout the album is different. It's like having a conversation with a close friend. Far is an album to cheer for. It’s warm, giving, and caring, and for me personally, the album of the year. [www.myspace.com/reginaspektor]
Andrea Weiss


The Big Pink
A Brief History of Love
4 AD Records

The Big Pink are a digital hardcore band, and this album is their debut. But they aren’t harsh, noisy, fast, or angry. They sound more like a softer, quieter, more streamlined Nine Inch Nails with lovelorn lyrics. This is not to criticize them. Their album is excellent, even if the lyrics to “Dominos,” their single, are sexist. The music flows very well, with electric guitars meshing nicely with the synths. This is a good album to spark the imagination, and also to dream to.
[www.myspace.com/musicfromthebigpink]
Andrea Weiss

Fifteen songs in the thirty-one minutes of this album fly by joyfully, good and noisy. A wonderful clamor. Lyrics and singing are almost beside the point on these lo-fi, minimalist, experimental pop songs. They add to the fun by being unintelligible. These songs are meant to be played at maximum volume, and you'll have a great time doing so.
[www.myspace.com/timesnewviking]
Andrea Weiss
Posted by AWeiss at 12:53 AM No comments:

Hello,
This is a music blog. If you like what you read and hear, I have more reviews at www.toneandgroove.com. 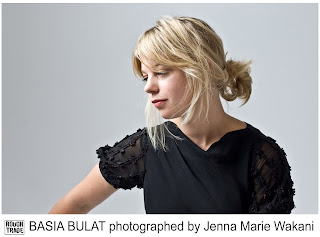 This is a track from Basia Bulat's upcoming January 26 2010 release HEART OF MY OWN . The album is thefollow-up to 2007's Oh, My Darling.

Susanna Hoffs and Mathew Sweet have made another covers album that focuses on the 70s. The covers are diverse-- everyone from Yes to Big Star, Carly Simon to Tom Petty. Yet there is a good flow to the song selection, Hoffs and Sweet made these songs fit together smoothly.

The album as a whole is somewhat uneven. Some of these covers work better than others, such as Yes’s “I’ve Seen All Good People.: Your Move/All Good People.” Even Steve Howe’s playing can’t save the song from being played and sung by rote. And the songs played by the numbers are what mars the album the most. It’s too bad Sweet and Hoff’s didn’t take more liberties with these songs.

There are four covers though that make this album worth it, Sweet shines vocally on Mott the Hoople’s “All the Young Dudes” and as this song is a tribute to Gay Liberation, which was a widely used term back then, the gay sub-text is emphasized. Hoff brings out the bitterness, anger and hurt of Carly Simon’s “You’re so Vain.” The song is interpreted as a tribute to Women’s Liberation, which was another way of saying feminist back then.

With albums like this it’s tempting to ask why this band or not that band was chosen, but the 70s was so diverse musically that no one album can do that decade justice. That someone tried is amazing enough, and even as the album doesn’t work overall, the parts are better than the whole. [www.myspace.com/sidnsusie]
Andrea Weiss

Hello. This is a music blog. If you like what you read here, I have more reviews at www.toneandgroove.com.

The overall mood of this album is contemplative: living a good, full life, loving all it has to offer, as part of a couple in a long time marriage. Ira Kaplan and Georgia Huxley, are the performers, he being the singer and guitarist for Tengo, Georgia is the other singer, and the drummer. They seem to be taking stock of their lives and their relationship, with grace, gentle wit, and a bit of wonder that they've lasted as long as they have, a bit of worry over how to make what they have keep going, and a sense of bliss that they are so happy and in love.

The music is just as meditative. Even as most of these songs are short, they fit the moods of the lyrics. They pull off all this very well. There is no irony here, musically and lyrically. This is straight emotion, and honest as well.

The two jams that close the album, "The Fireside" and "And the Glitter is Gone" run counterpoint to one another. "The Fireside" is all whispering accoustic guitars, with just a few mumbled words for lyrics. It is eleven minutes long, and a beautiful piece of music.

"And the Glitter is Gone" is fifteen minutes long, and mostly Ira's famous fuzz, feedback and melodies taking the place of lyrics. Georgia's deft, fluid, and flowing drumming alongside a galloping bass makes for sonic regret, some sadness, but also a fierce determination to bring the glitter back someday. It is a smashing way to close out a great album, and a worthy addition to their canon. [www.yolatengo.com]
Andrea Weiss

Victoria(no last name given) and her guitarist Andres Soderstorm traveled to Pakistan to make this album with musicians from Pakistan. They were male musicians, Victoria wanted women, but was told that it was too dangerous for them to travel from north to south Pakistan. None of the musicians spoke English, except the Trees host. Victoria used other means, too, like singing what she wanted the musicians to play. Teaching the musicians to play wearing headphones, and playing at times out side the studio, which was harder than when they were in the studio.

So what did they come up with? Ambient, atmospheric slow music, Victoria’s whispered singing, and quietly powerful guitar playing. These are relationship songs, mostly romantic, except for a re-working of Animal Collective’s “My Girl” re-titled “My Boys.” That remake is the loudest song on the album, and fits into the other songs very well.

The concept is interesting, the music is great, and Victoria’s singing fits the mysterious mood of the songs. It’s different, a nice album for quiet times. [www.myspace.com/takenbytreesmusic]