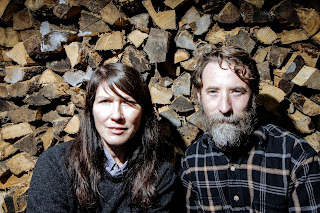 R. Ring - "Loud Underneath": A super mid-tempo rocker that is light-footed and nimble. It’s a relationship song; maybe about trying to tell someone you like them.

R. Ring - "Singing Tower": dreamy, loving, sad, hushed music, about an uncle of Mike’s who lived across from an ancient church, marked by ringing bells from the bell tower. When he died he might have haunted the bell tower. Mike wanted to let him know that it was okay to climb down.

Quailbones - "A Tip to Trick":  As dreamy as Singing Tower.  Louder, crunchier, darker.  Maybe about a relationship that’s ending.

I saw R Ring when they stopped off in Philly for a show at Johnny Brenda’s.  I knew how good they were after having seen them three years ago at a place in Huntington , WV named The Black Sheep.  R. Ring stole that show, too.

Johnny Brenda’s has a better sound system than The Black Sheep.  I spotted Kelley, Mike, and their drummer, Leo, and went and said hello. It was good to see them since I hadn’t seen Kelley and Mike since The Black Sheep. I was also glad to make Leo’s  acquaintance.

R. Ring headlined a three-person bill. and up first was Cynthia Schemmer, from the band Radiator Hospital, who was wonderful. A singer/songwriter that was appealingly grungy. After her set, I bought a copy of She Shreds from her, a magazine for women who play guitar and bass. It’s well written, feminist, and it was great to read the interviews where smart questions were asked, and that took women seriously as guitar and bass players. Ms. Schemmer writes for it, and is very good.

If you’re part of the Philly indie scene, you know The Dead Milkmen, who have been around since the 80s. Joe Jack Talcum is a member of said band, and I wasn’t sure what to expect from an acoustic set by him. But he was charming, in a Jonathan Richman sort of way. And a tremendous musician.

R Ring played all the songs they had released over the years. They took on new dimensions, with acoustic guitars pouring feedback and distortion and Kelley’s fantastic vocal effects from her pedal board.  It was 40 minutes of greatness.

After their set, with Kelley’s help I bought everything R.Ring had to offer including  a T-shirt, and  an EP they’d made for a Dutch label, Mass Market, called The Rise EP. I’d been wanting to hear it, and if you can find it, pick it up.  It’s wonderful, and all packed in an evidence bag, the kind the police use.  I’d wanted to stay, hang out a bit more, but the band was tired, and i didn’t want to overstay my welcome. So we said goodnight, and I went home happy.

I recently sat down with Mike Montgomery for an interview about the new songs, and upcoming tour dates. I want to thank him for that, and thank the band for making my night and seeing them live again.

Andrea Weiss: How did you meet Protomartyr and Quailbones?

AW: The artwork for the Quailbones 7 inch is so good. Who drew it?

MM: Ali Calis at Able Projects in Cincinnati did the art. He's a wizard.

AW: I also like the Protomartyr artwork, who drew that? Both are very arresting.

MM: Alex from Protomartyr did the art for that 7 inch. He is also a wizard.

AW: R. Ring's two songs for the 7 inches are so different.  Do you like that kind of contrast?

MM: We just go one song at a time, so sometimes they turn out differently from each other.  It wasn’t intentional to write two contrasting songs, but yeah, we like how they turned out.

AW: Who played the drums on Loud Underneath?

MM: Joe Frankl is the drummer on this one. Another wizard.

AW:  How did you get Hardly Art, Protomartyr’s label, to put out the split 7 inch with you and them?

MM: Protomartyr has a contract with Hardly Art for their other releases so they arranged it all.

AW: Do you and Kelley write separately, and bring in complete songs, or  collaborate when you play together?

MM: Yes to both. We write separately and together.

AW: And if you do write together, who does the music and lyrics?

MM: We write both music and lyrics, together and separately.

AW: I’ve been reading in interviews that you’re working toward a full-length album, which will be exciting. Any timetable for putting it out?

MM: No ma’am. No timetable whatsoever.

AW: Do you plan to tour anymore this year, or save it for next year?

Earlier interview that I did with Mike here: http://allaroundrecords.blogspot.com/2012/06/normal_28.html

Andrea Weiss
Posted by AWeiss at 3:11 PM No comments: