Fans of Faye
Designed To Be
Self-Released

I am really happy this band brought their music to my attention, and I thank them for doing so. This is a young band from the UK, with an album released in 2012.

Imagine Kurt Cobain playing guitar alongside the Edge and Bono in U2, with Nirvana still Kurt’s main band, and you'll have Fans Of Faye, named for their dearly departed friend.

Whether about love or life, their lyrics have the same righteous indignation as U2 and Nirvana, which is why this band is so refreshing.  They’re barely touched by any of the current revivals.   No 70s, barely any 90s.  Clearly, college rock never died for this band.

The album is available free from Band Camp, and I strongly urge everyone to check it out.  You'll find an album that shows indie rock as it used to be, before any revivals became embedded in it. http://www.fansoffaye.co.uk  https://www.facebook.com/fansoffayeuk
Andrea Weiss

The clip, shot in black and white, illustrates a romantic relationship, or perhaps a friendship, that’s gone awry.  With lots of eye rolling and lip curling, the band sarcastically explains what happened.   Ruth, the person in question, is never shown.  Only the band, hinting at how much they loathe her.

The music, surrounded in echo and reverb, is pointedly barbed:  “this is shit, there’s no such thing as rock,” perhaps referring to the dance music clogging up indie rock these days.  But this song rocks, and I can’t wait to hear the album.  In the liner notes to this clip, the band says that the music was inspired by their “living and dreaming passionately.” If their upcoming album World of Joy lives up to this sample, it’s going to be one hell of a superb disk.  http://www.youtube.com/watch?v=50QFJJQGTrs
https://www.facebook.com/howlerband

Andrea Weiss
Posted by AWeiss at 11:44 AM No comments:

Long Live College Rock: An interview with The Big Believe 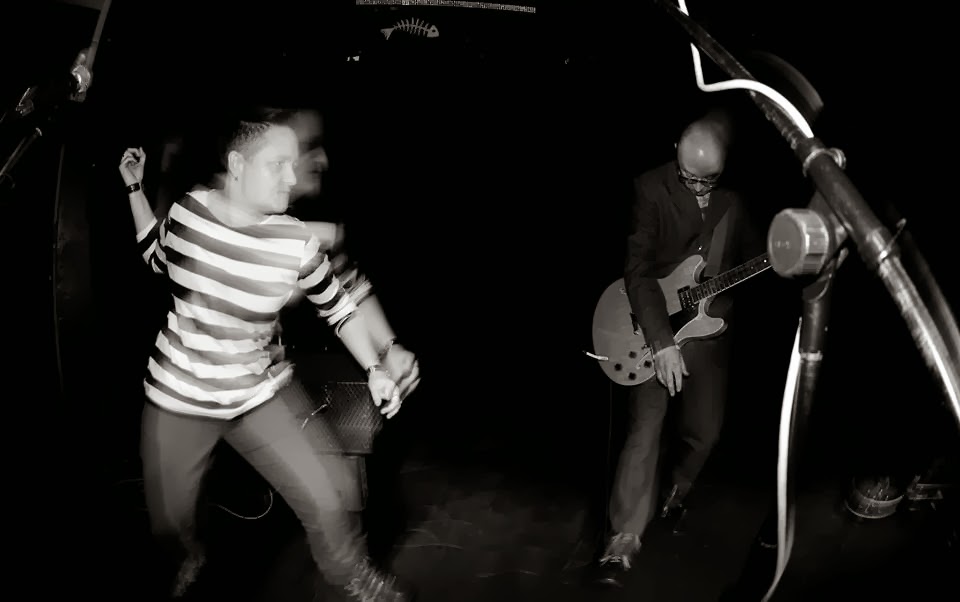 I first became aware of The Big Believe when my best friend, Jen Grover, told me about “Let’s Pretend We’re Spies.”  I loved the song the first time I heard it.  It just seemed that, as on the song, college rock lived, breathed, and pointed a musical way forward.  I ordered the 7" and when it arrived, I put it on and thrilled to it.

I also checked out The Big Believe’s other songs and found they went in a more electronica direction, and were also wonderful.  One had Todd Fancy of The New Pornographers on guitar.  It's a favorite band of mine.

“Let’s Pretend We’re Spies” features a vocalist who was one of my favorite musicians of the 80s and, at this point, of all time:  the late Faye Hunter, who I was acquainted with on Facebook.  To me, Faye’s singing was, and still is, pure magic compared to most of her college rock peers.   I paid tribute to her on my blog when she died back in July of last year. The link to that, and to my review of Spies is at the bottom of this intro.

Amanda Thompson, who leads The Big Believe, loved my review of Spies. I was so touched.  It is always very humbling when you know your words have the power to strike a chord, and that was the case here.  We also became friends, and I value that very much.  Her band is college rock in the best sense of the term, and Faye lives on through Spies.

Amanda recently was kind enough to answer some questions of mine for the interview below.  I thank her again, and hope you enjoy what she has to say as much as I did.   http://allaroundrecords.blogspot.com/2013/10/thebig-believe-letspretend-were-spies.html

Andrea Weiss: How did The Big Believe start?

Amanda Thompson: I'd been in bands for years but it was that age old problem of compromise, everyone pulling in different directions. In 2007 I decided it was time to break free & see what happened if I did everything myself. I began under the name OZONE BABY, wrote some songs & made recordings where I played all the parts. These songs went online & people just assumed it was a band so I got some musicians together to play the songs live & continued to do the recordings alone. Recently I changed the name because Ozone Baby is the title of a Led Zeppelin song & everytime we put videos on Youtube they got grouped together with Led Zeppelin tribute bands! The Big Believe was an example of an incorrect pairing of an adjective and a noun, given to my boyfriend by his tutor when he studied English at university and I'd been dying to use it!

AW: How did you meet up with Faye Hunter?

AT: The sad thing is Faye Hunter & I never got to meet in person. We both wanted & planned to but we never got that far. I'd contacted her on Facebook in 2010, as a Let's Active fan, and due to her friendly persona plus many things in common, we
struck up an online friendship. She'd been telling me that singing was the thing that she could always lose herself in when times were tough, even if it was only singing around the house. I decided to pop the question and ask if she would be interested in singing on one of my songs. She had always been very complimentary about my tunes & I was, of course, beyond thrilled when she said yes. She said she had no home recording facilities and would be more comfortable getting someone to help
her record. The obvious choice was Mitch Easter. She and I were both excited when he said "sure, do it here". After "Let's Pretend We're Spies" she asked if I could get over to Mitch's to record further songs with her. We had this planned for this year.

AW: Your other songs are more electroinica, and Let’s Pretend We’re Spies is so different, was that just the way the song presented itself?

AT: It was the first song I'd written after a two year abstinence due to illness. I think that bad experiences teach us stuff & make us grow up. I'd come back to songwriting as a less manic, more reflective person. So I think the song was maybe just more mature.

AW: It’s so wonderful to see all the attention getting paid to Spies. I hope that’s been your experience too.

AT: Yes it has. Sometimes I feel guilty that I'm getting to enjoy the attention it's receiving when Faye can't, but then I'm pleased to think that Faye is still making a difference,
even after she's gone.

AT: On a general level, everything I've ever listened to which is pretty much most rock and pop from the 1950's to present day. More specifically, I love the energy of punk with the melodies & harmonies of classic 60's bands. As Todd Fancey once said
"melody is key". If I had to take just four bands to a desert island, it would have to be Led Zeppelin, Let's Active, Arthur Lee & Love and The New Pornographers.

AW: How did Todd Fancy come into the picture for Girls With Cassettes?

AT: I see The New Pornographers whenever they play the U.K and at a gig In Bristol in 2007, those band members who smoked had popped out the back of the venue for a cigarette after the show. I took the opportunity to go and chat and they were great guys, very sweet to me. Knowing I'd driven for 6 hours to get to the show, they even emailed me the next day to see if I got home ok. I replied with a link to a couple of my songs (!) they were very complimentary and sent the link to Todd (who wasn't
outside smoking that night). He got in touch a few weeks later and said he really liked the tracks so I asked him if he fancied playing a guitar solo on something new. Again, I was thrilled when he said yes. He recorded his part at his home studio
in Vancouver and sent it to me for me to mix into the track here in the U.K. He and I met a couple of years later when he put me on the guest list for a New Pornographers London show.

AW: Would you like to come to the US to tour someday?

AT: Yes I'd love to! I have been talking to a few friends of Faye’s about the idea of a Faye tribute concert. i.e a collection of different band & artists getting together to play. If we can pull it off, I'd come over to join in. So the possibility of a one-off show is certainly there, if not a tour.

AW: Do you plan to have an album out at some point?
AT: Yes. Ozone Baby put an album out in 2009 so I'm way overdue for another one. The Big Believe album "Then Again" will be released on CD and digitally in 2015. It will be a ten track album and we are halfway through right now.

The grooves and beats are so smooth and flowing on the second releases from this L.A. band that I want to dance to them, or hear them in a disco hearing a hot remix. That’s one thing I love about this album, for all the good dance music that’s out right now in the alt-dance scene, most of them don’t have songs you can dance to, much less lyrics that detail the dark side or relationships as well as this band can.

Their lyrics, which detail the dark side of relationships, are chanted in unison, a tricky thing to pull off well, but when it happens it’s thrilling.  And as dark as these lyrics are, they’re not downers.  “Love Is To Die,” immediately turns that title around by saying how much they want to live and love.

This album is a very worthy follow up to their debut, The Fool, and shows a band on the rise, and I hope they rise to the top, and even higher than that.
https://www.facebook.com/warpaintwarpaint
Andrea Weiss

Posted by AWeiss at 2:21 PM No comments:

Stephen Malkmus & The Jicks
Wig Out at Jagbags
Matador

This is a perfect album. Great guitar.  If Malkmus ever puts out an all-instrumental album, I’d have it on repeat, just to hear his guitar over and over. He’s pretty much patented his lyrics: clever, sly, and somewhat cryptic.  “Independence Day” is a nice song about good self-esteem and “Cinnamon and Lesbians,” which seems to be about neither, is why I say somewhat cryptic lyrics.  Both songs are the standout tracks, and the rest have a good groove, and cool pop/rock sensibilities. Absolutely nothing wrong with them.

So it pains me to say that this is almost a duplicate of his last album, Mirror Traffic, in the sense that these songs are as good, and almost as interchangeable. I loved Mirror Traffic, said it was his best album, and the judgment still stands.  If you liked Mirror Traffic, you'll love this album. I’m not slamming Wig Out at Jagbags.  I love this album to pieces, but I wish Malkmus and company would shake things up a bit, just the way he used to with Pavement.

Those days are long gone, but not forgotten.  And since Mirror Traffic was something of a hit, it’s totally understandable that he’d want to continue in this vein.  But I wish he’d taken that album and just used it as a starting point for branching out, and progressing beyond that. The upshot is that we may have to learn to love him with this sound, which isn’t a bad thing here, but it also leaves a nagging sense that he could, and should, do better.  If he ever makes another album as good as this or Mirror Traffic, I won’t be nagged by anything with it.
https://www.facebook.com/pages/Stephen-Malkmus-The-Jicks/56710584421
Andrea Weiss

Posted by AWeiss at 3:55 PM No comments: