I belong to a Facebook group called Screenwriters With Disabilities. What’s mine? A learning disability severe enough that I can't drive or work a regular job. I was very glad to be invited to this group for that reason, as I can write. If I can’t work a regular job, I can at least have a writing career.

The backdrop for this group is how marginalized we are. For example, amid all the uproar over Straight Outta Compton being all but ignored at the Oscars earlier this year, all the allegations of discrimination, the disabled were not mentioned at all. It is too obvious to point out that we exist, but we don’t get a lot of work, from actors to screenwriters to other behind the scenes jobs, because yes, Hollywood is ableist. And when a film about the disabled is made, it might ring true to a point, like Dustin Hoffman in Rain Man, or have a believable character like Sean Penn in Sam I Am, but with an unrealistic plot.

I mostly write indie scripts. It’s what I write best, and I hope things are better in the indie world. To whomever is reading this, the next time a Compton-like furor erupts, and it will so long as Hollywood is Hollywood, make sure to make a place for the disabled.

Andrea Weiss
Posted by AWeiss at 6:00 PM No comments:

I met Keith Emerson in 2010. He and Greg Lake did a duo tour. I was lucky enough to see the show at the Keswick with my friend, Jen Grover, who had come from WV to see them too. Jen had a blast along with her new friends Sharon and Eileen, who she met in line for the meet and greet. I couldn’t afford that, but I had a great time seeing the show. It was part Q&A, mostly music, a little back story on the songs. For example, Greg Lake wrote Lucky Man when he was 12.

We had heard they were coming out to the barricade after shows to say hello and sign a few things, so we waited, and they did. It was then I met Greg and had him sign my Tarkus shirt. He is a big, tall man, and I was a little starstruck. He picked up on my vibe, clamped an arm around my shoulders for Jen to take our picture, and said, “Relax.” He held me tight for what seemed like minutes. 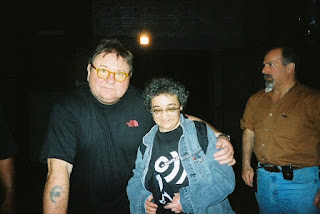 Keith and I barely spoke, we said hello, he signed my shirt, and I managed to tell him how much I love his music, which he thanked me for. Jen took this wonderful photo, my cover photo for Facebook and Twitter. I was lucky to have had even that moment with him. A rowdy pack of guys behind me were screaming his name and waving things for him to sign. Greg was on his way back to the bus. Keith followed him moments later.


Keith took his own life on March 10th, 2016. I wasn’t depressed so much as very sad. It took a while before I could listen to him again. I feel better now. But this is his legacy, what he means to me. I’ll be forever grateful that I got to meet him. That we exchanged a few words. And this wonderful photo.

Posted by AWeiss at 5:57 PM No comments: