"Take Out The Poison," the upcoming BBB’s album, will be released August 25th, and this excellent clip is a great run up to it. In the clip, a man and woman walk separately through the streets of San Francisco. They could be the duet, but they don’t know it yet. The music is college rock on its jangly side, very sweet, very nice.

R. Ring’s return to Philly was wonderful, a show I’d been looking forward to. This time they got to Philly without a hitch. For their gig here back in April, their van had broken down, and other mishaps, so all of us were very thankful they arrived this time with no problems.

Everybody Hits is a batting cage facility that also books concerts, and while it’s tiny, the sightlines are good everywhere, and it’s very clean and comfortable. The audience ranged in age and gender and was a very good mix.

Sam from Radiator Hospital was next. I’d not seen him with his band, but I’d heard enough on Philly’s indie rock internet radio station, Y-Not Rock, to know that I’d like him. Very soulful, great lyrics, very cool.

R. Ring, who are Kelley Deal and Mike Montgomery, played most of the songs off their album from earlier this year, "Ignite The Rest," and were damn good on all of them. They had a new drummer, Roseanna Safos, from Cleveland band The Goldmines, and she was excellent. While I didn’t catch the title or lyrics, they played one new song, and it rocked. It’s amazing to hear the interplay between the guitars and drums; it's their own sound and style of experimental electric folk, no comparisons to anyone else.

After the show I said hello. They were happy to see me again. Kelley was thrilled I'd purchased Breeders tickets, another show I'm really looking forward to.  https://www.facebook.com/rringsings

I’ve been into Jill since 1995 and "I Kissed A Girl," which is not a cover of the Katy Perry song. I saw her for the first time at Lilith Fair, and have continued seeing her to this day. My fandom has stretched across three states, and many albums, all good. And she’s a blast to see live.

William Way, named after a 70s Philly LGBTQ rights activist, is a great place for everything LGBTQ, located in the heart of the “gayborhood,” Philly’s LGBTQ area. I was thrilled to find out Jill was playing there, and bought tickets immediately.

She was great, as usual, and played most of her best known songs plus a few new ones, just her and a modified backpacker guitar, which she’s been known to solo on like a guitar hero. She did play a short solo on it this night.

Her back stories were great, too, like how much flack she got for her song "America Back" (“When they say they want their America back, well what the fuck do they mean?”).  Another was about a troll, and getting that troll off her back with a new song. Other stories told of her teen years in Cinnamon Park, taking magic mushrooms to watch the Battle Of The Bands, with Chicago’s "Saturday In The Park" as a motif, and making sure everyone knew that the two woman in "I Kissed A Girl" did more than kiss (“They can have their diamonds, and we’ll  have our pearls”).

After the show I said hello to Tony, Jill’s longtime webmaster and moderator of her email discussion group Happytown, named for her song about the joys of Prozac. Tony's a really nice guy. Then I spoke to Jill, who I’ve known for twenty years. She loved my anti-Trump shirt. I had a fantastic evening. 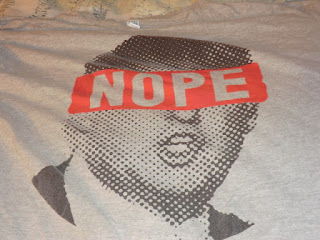 The shirt in question. The feminist group Ultra Violet had a fund raiser with this shirt, and it was too good to pass up. More here: https://weareultraviolet.org
And Jill's site: http://www.jillsobule.com

Posted by AWeiss at 1:43 AM No comments: