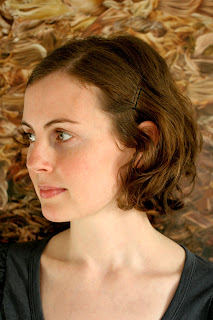 A Loving Farewell: Kathryn Calder’s Home-spun Tribute to Her Mother

I first heard of Kathryn Calder when she joined The New Pornographers, and soon after, Immaculate Machine, a very good indie folk/rock band who disbanded in 2009, though they are still friends.. Calder’s contributions to the New Pornographers are wonderful, and “Sweet Talk, Sweet Talk” is one of my favorite songs on Together. I found out about her solo album Are You My Mother? from “My Morning Download” a feature on WXPN, Philadelphia’s public Triple A radio station. The song in question was “Slip Away.” That sweet, sad and terrific song led me to her album, which I reviewed for this blog.

Are You My Mother?, named after the children’s book of the same name, is a loving memorial to her mother, who passed away from Lou Gehrig’s disease. The album is not a eulogy, but a heartfelt farewell. The album was recorded at her mother’s house, while Kathryn cared for her, and the music has a homelike, lived in feeling, and is simply amazing to hear.

Calder took time out of her busy schedule, which includes touring right now with the New Pornographers, to answer some questions. I sincerely thank her for her time and her thoughtful answers.

Andrea Weiss: What type of music were you listening to while making this record, since the album seems to be folk/rock?

Kathryn Calder: I was listening to all kinds of things – I love the Brazilian 60’s psychedelic folk movement, it inspired me to want to use percussion as much as I did instead of a drum kit. I also took a lot from Sigur Ros. I think they are brilliant at atmosphere. I wanted my record to have lots of weird sounds and I wanted the songs to each have a mood.

AW: I know that your mother had let you record your album in her living room. How did that feel to you?

KC: Well, I love my house. I grew up there, so it’s very comfortable to me. It’s an old character house from 1912 with high ceilings and hardwood floor, and we set up in her living room – there was an old wood sliding double door that could slide open or closed between the guest room and the living room, so we made the guest room the control room and the living room the tracking room. We choose to record the album there partly because the acoustics were so nice, and also so I could record and still be at home, which was important to me. Among other reasons, I had been on tour for almost three years strong at that point, so the idea of leaving my house to go to another city to record wasn’t appealing to me at all.

AW" Did your mother get to hear these songs? And if she did, what did she think of them?

KC: She loved them! She listened to the record every day. Seriously, it was on almost every day. She was very supportive of me!

AW: I like the way you use the seasons changing, summer into fall, and then fall into winter, as a metaphor for loss. What about the seasons inspired you to use this?

KC: I think it was more a metaphor for change than for loss. It also works for loss, but I was thinking of it in terms of life always moving forward, whether you want it to or not. It’s a well used metaphor, but also a good one.

AW: There are songs like “Castor and Pollux” that just burst with life and happiness. Did you want these songs to balance the sad ones?

KC: Yes, that really was my intention. I wanted there to be some balance, I didn’t want the whole record to be the same kind of song, so I chose to include some upbeat songs in there.

AW: There are songs with wonderful wordless refrains where everyone is singing in unison. Are those refrains one of your favorite types of refrains?

KC: I don’t know if they’re my favourite type of refrains, but sometimes melodies just work better in ooohs. That was the case for my song ‘Slip Away’. I thought about putting some words in there, but nothing sounded as good as the ooohs, so I had to go with what sounded the best.

AW: Was it a different dynamic making a solo album, as opposed to one from The New Pornographers or Immaculate Machine?

KC: It was a different experience for me. I had complete creative control over my solo record. I wrote all of the songs and a lot of the arrangements. I had help from my various musician friends who came up with amazing parts, but a lot of it was also me and my producer Colin Stewart messing around late at night with strange objects trying to come up with percussion parts or those subtle background noises that add those interesting layers.

AW: Any tips for aspiring musicians?

KC: Have fun and good luck!

Posted by AWeiss at 5:35 PM No comments:

Mike Hadreas is Perfume Genius, and his songs, recorded while living at his mother’s house for a year after living through some dark and horrible times, are mostly just him at the piano or organ. He is very young, in his 20s, and while his voice is one of a young man, he seems wise beyond his years, years of very hard living.

If these songs were total fiction, Hadreas would be just one more whiner and/or cry baby. But these songs allude to where he has been emotionally, and the situations he found himself in, which is what makes them real and heartbreaking. However, by facing down his feelings, memories and thoughts, he offers hope that if he can get healthy, others can too.

This is a great album, cathartic, wrenching, painful, but yet uplifting. Hadreas has a lot of talent, and it will grow. It will be wonderful listening to it happen, and hearing where he will take us next. [www.myspace.com/kewlmagik]

This is prog at it’ most plastic, like Asia’s “Heat of the Moment,” or Yes’s “Owner of a Lonely Heart.” What saves these songs from total lameness is that the band mixes in variations on Blur’s “Boys and Girls” or the Gorillaz’s “On Melancholy Hill.”

Lyrically the best line is a dumb joke: “the birds and bees, they all have STD’s.” Otherwise these songs are fairly pleasant, if lightweight musings on falling in and out of love. So, if something bouncy and light is needed, this album is perfect. [www.myspace.com/mysteryjets]

Kathryn Calder
Are You My Mother?
File Under: Music

These brilliantly simple, yet emotionally complex songs have a directness reminiscent of Dar Williams and Jonatha Brooke at their most stripped down lyrically, with the homespun quality of early Kate and Anna McGarrigle’s music. There is sadness, happiness, anger, fun, and a gentle good humor, a young woman finding her voice, feeling older, sadder and wiser, yet knowing good things are out there.

Calder recorded these songs in her mother’s living room, playing most of the instruments, with Colin Stewart producing the album. Todd Fancey and Kurt Dahle of the New Pornographers (of which Calder is a member) and Ladyhawk, along with Paul Rigby from Neko Case’s band, are some of the special guests. Neko Case sings on two tracks to round out the guest list. All make the music magical, and amazing. This rough folk/rock soars. Calder’s singing is a joy to hear. She is very down to earth, wise, but also lets her emotions show, and it’s these emotions that make the songs vibrant.

Kathryn dedicated Are You My Mother to her mother Lynn, whom she cared for as she was dying of ALS, (Lou Gehrig’s disease). Her mother did hear these songs, loved them and listened to the album every day. However, this album is far from a eulogy. Instead, it’s a tribute, a heartfelt good-bye, a loving thanks for the memories, that assures her spirit will live on in this music, and also observers that life is for living and being happy. Put all of the elements of the album together, and this is the debut of the year, and also one of the best albums of the year. Out now digitally and on CD August 11. [www.kathryncalder.ca][www.facebook.com/pages/Kathryn-Calder/86730676336]
Andrea Weiss
Posted by AWeiss at 12:07 PM No comments: