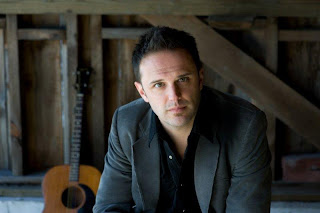 The Modern Folksinger. An interview with Mark Erelli.
I’ve been listening to Mark Erelli since his first album. He is an amazing songwriter, and singer, and his new album, Little Vigils. continues his string of great albums. The Darwin Song Project is also very good, a celebration of Darwin as a person and his work. The album that was drawn from the concert, Origin of the Species, is fun and very serious at the same time.

I recently interviewed Erelli, and found his answers thoughtful and insightful. And I apologize for misinterpreting one of his songs.


Andrea Weiss: Nature in its spiritual form seems to inform the lyrics of the songs, to form an atmosphere of the natural world. How important is that realm to the album?"

Mark Erelli: There's a lot of natural imagery on this record, both on a larger, landscape scale (e.g. oceans, mountains, etc) and on a more finely detailed level (e.g. life cycle of a parasitoid wasp). Nature is a big part of how I observe and interact with some notion of an infinite force, which is how I would loosely define spirituality. Now that I have a son, I'm understandably sharing with him some of the ways with which I interact with nature, and as such, it is on my mind a lot. On Little Vigils, nature is very much the backdrop against which many of these songs unfold.

AW: The album seems to say that people should take nothing for granted. Do you intend that to be the theme of the album?

ME: Yes, this is the larger subtext behind the phrase "little vigils." I use it in the opening track, "August," as a specific reference to checking in on my sleeping son every night before turning in myself, a moment to keep watch over the most important thing in my life. After I made the record, looking over this group of songs I see that same idea woven through each one. It's like I'm reminding myself to pay attention, live life fully and consciously, and keep watch over the things that make life so rich and fulfilling, lest I take them for granted or they slip away.

AW: How much of this album is based on your own personal experiences?

ME: From the above, I guess this is obvious, but most of these songs have very personal origins and meanings for me. However, there is a healthy degree of universality here--this is stuff we all can relate to. I'm fairly certain that comes across, because I think of my songs as drawing much of their strength from the fact that I am not much different from anybody else. I don't view myself as some rarified artist doling out insights to the less enlightened. The stuff I write about is what anyone could see and feel if they were tuned in to the world.

AW: Did the album start from the Darwin Song Project, or from a different place?

ME: I had other songs written before the Darwin Song Project, but had not written much in the 7-8 months before that experience. The project really shook things loose for me from a writing perspective, and helped me finish up the batch of songs that came to be "Little Vigils."

AW: Was it fun making the album, especially since you had worked with most of the people on it before?

ME: Making this record was a blast. It's hard to compare to the process of making my previous records because I'm more experienced and confident now, and I'm not as anxious or stressed out that things will fall apart. I had worked with all the guys in the band in other formats, like bluegrass bands or as other artists' sidemen, so there was a good foundation of friendship and mutual admiration. To be able to work together on something that wasn't just a one-off show or random club date and dig into something a bit more substantial and extensive, I think was really enjoyable for everyone. Plus, when you have all your friends in a Maine farmhouse for four days, with whiskey, bb guns and rock n' roll...if you don't have fun you are most certainly in the wrong line of work.

AW: How do you feel your songwriting has evolved over the years?

ME: I'm not sure how or if the finished product of the song I write has changed, but I know the way in which I go about writing songs has changed substantially. I used to have plenty of time to sit and stare out the window with a guitar and a cup of coffee, waiting for inspiration. Nowadays, with a young son and another on the way, I have to work much more quickly, and I steal moments to work on songs bit by bit whenever I can.

AW: The Darwin Song project is very pro-evolution and anti-religion, was there a desire to push the envelope on that subject?

ME: With all due respect, I disagree with the entire premise of this question. The songs on the Darwin Song Project focus far more on the personal life of Darwin as a father and husband. There are many more references to the fact that religion and science can co-exist, or at least comment on different areas on the continuum of human experience, than there are disdainful dismissals of faith. Even my song "Kingdom Come," ends with Darwin professing his wish that he could believe in heaven so as to be closer to his devout wife. In general, I have no desire to write a song with the sole purpose of pushing envelopes or upsetting people, but I also feel it is dangerous to censor myself by not writing about something I feel deeply about for fear that it might anger someone else. All I can do is write the best song I can, offer it up as honestly as I'm capable, and then hope nobody labels me inaccurately.

AW: Was the Darwin Project album fun to record?"

ME: The Darwin Song Project is a lot more fun now that it's in the rearview mirror. While we were writing the songs and preparing for the live show where they would be recorded, it was so stressful that basically half of us were making ourselves sick with anxiety and rundown with colds! After we'd come through successfully on the other side and the project was completed, I think everybody looks back on it as a lot of fun, but we probably didn't feel it when we were in the middle of doing it.

AW: Is Darwin an influence on you?

ME: Sure, in the sense that any original thinker who comes up with an earth-shaking theory that entirely restructures the way the human species looks at itself! I have always been into the nature, I played in the woods a lot as a boy, so his ideas resonated with me once I got to the point in school when they were introduced. As I have researched Darwin 'the man' more, I can see a lot of his qualities as a father and a husband that I would be grateful to emulate.

AW: Did you really have a band like the one in Basement Days?

ME: Yes, I really did. Several, in fact. I didn't make up much in that song, not even the names of my former bandmates! I may have thrown a couple of songs in there that we didn't actually play simply because they preserved the rhyme scheme, but 99% of it is true, including the bit about the fire department shutting down a local gig because of our smoke machine.

AW: What do you think of young folk singers like Neko Case?

ME: I think she is the latest in a line of truly unique and iconic American voices, stretching from Roy Orbison and Willie Nelson, up to more recent singers like Jimmie Dale Gilmore, Iris Dement and Patty Griffin. These artists could sing the phone book and make it sound otherworldly.

The top-notch playing on this album can shift on a dime to folk, to country, to rock. Erelli and his band are well versed in all three styles, and the playful, yet serious music they make is both fun and insightful. Even when the lyrics are downcast, like on “Hemlock Grove,” the music illuminates the lyrics to give the song a haunted feel, a feeling of experience, and lessons learned. There is even a roaring guitar solo in the Springstein- like “Basement Days,” about Erelli looking back on his teen years, and all the rock bands he played in, even one that had the plug pulled on them in a church basement because the fire alarm was set off by their dry ice machine.

The natural world and spirituality are woven into a theme of never taking anything for granted, whether it’s keeping an eye on his son while he sleeps, starting over by leaving some place, like “Columbus Ohio,” or Darwin as a man and a scientist. And Darwin provides a good and interesting twist to the subject of spirituality.

Erelli was invited in 2009 to perform on The Darwin Song Project, a concert and album celebrating the 150th anniversary of Darwin. The album that is drawn from that concert, the Origin of the Species, is highly recommended, both for the rollicking folk music, and the lyrics examining Darwin’s work and his life as a husband and father. All sides are examined, including religion, which at first glance sound anti-religious and really aren’t. His two songs, “Kingdom Come” and “Mother of Mysteries,” which also appear on Little Vigils in a band format, are very much in this vein lyrically, just delightfully expanded and musically lively

This is a wonderful, thought provoking and versatile album, one that has meaning, and yet never seems weighed down. One of the best and strongest albums I’ve heard all year.
[http://markerelli.com]
Andrea Weiss

Good basic garage rock, very retro-sounding musically, as in three chords and the truth bashing away. Lyrically, slightly more sophisticated, which makes them modern garage on the topics of “my baby done me wrong,” “I love my baby,” and “the whole world is against me, but I’ll survive anyway.” A fun party album and just a fun album period. [www.myspace.com/harlemduh]
Andrea Weiss
Posted by AWeiss at 12:25 AM No comments: