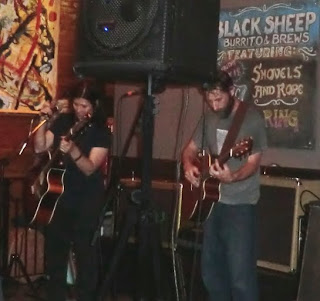 An Interview with Mike Montgomery

I first heard of R. Ring through a newsletter from Tiberius Records, the Cincinnati label co-founded and co-run by Mike Montgomery, and home to both Ampline and Thistle, Mike’s other bands besides R. Ring. Ampline plays mostly instrumental indie rock, Thistle hard rock. Both bands have powerful music, and cool lyrics. I saw Thistle live, in Huntington, West Virginia, a few years ago, a great concert. And I got to meet Mike, a very nice guy. I’ve been a fan of Mike’s bands ever since, R. Ring being his latest. It’s one man and one woman, two guitars, expertly, skillfully, and thrillingly played. They can make a lot of noise, or be quiet and contemplative. Both halves of the duo sing, and both have terrific voices.

The other half of R. Ring I’ve been into since the 90s. I’d been a big fan of the first two Breeders albums, but loved Last Splash. “Cannonball” is my favorite, for the way Kelley Deal played on that song, and the way the Deal sisters harmonized on the vocals. Kelley is the other half of R. Ring. I also have the Kelley Deal 6000 albums, and love them for their wild, crazy, off the cuff fun appeal. I also recommend the two Breeder’s albums released in the 00’s, Title TK and Mountain Battles. Fun, quirky rock for any hour of the day.

When I saw R. Ring play in May, again in Huntington, I thought they blew the main act off the stage. And I got to meet Kelley, a wonderful experience.

R. Ring’s first release is a 7-inch on Misra Records, two songs recorded on one mic in Kelley’s kitchen. Kelley’s song is “Scary,” a remake from the second Kelley Deal 6000 album Boom Boom Boom. It’s stark, electrifying, and sweet. Mike’s song is “Steam,” gentle, hushed, and breathtaking. I’ll let Mike take it from there, in my recent interview with him.

Andrea Weiss: How did you meet?

Mike Montgomery: We met through the Buffalo Killers. They joined Kelley on a song for a guided by voices tribute album and I recorded the song. It's called 'scalding creek'.

AW: Where do you get your ideas for songs?

MM: I'm not really sure. They just come and go... Mostly go

AW: You recorded your 7-inch on one mic in Kelley’s kitchen and got the fullest sounds from it, which is great. How did you do that?

MM: I think her kitchen just sounds good for certain songs. There's a lot of wood and tile. It's got supportive acoustics.

AW: How do you bounce ideas off of one another, especially when you live so far apart?

MM: We're only an hour apart. We play together every week and we use phones, computers and carrier pigeons to communicate between practices.

AW: Do you prefer creating soft, quiet music, or lots of noise? Which do you prefer listening to?

MM: I like all of those things at various times and I like playing all of those. With R.RING I think we do a bit of all of that from song to song.

AW: Are you planning to make an album?

MM: We are planning to continue recording for a series of 7" releases... Maybe an album at some point.

AW: What influences do you bring to R. Ring?

MM: I'm not really sure... I like a lot of different stuff but I don't know if it comes through in the songs.

AW: How did Misra Records come into the picture?

MM: Leo that runs Misra is a fan of Kelley's music and approached her about working together. There are some Dayton, Ohio ties at work somewhere.

AW: Whose idea was it to cover Shellac’s “Ghost”? I really like it.

AW: You both lead other bands where the focus is squarely on you. With R. Ring, it’s on both of you. Does that take some pressure off?

MM: I have never been in a band where the focus was squarely on me. R.RING sort of exposes us each a bit more as there is no mass of sound to hide within or behind. If anything, there's a little more pressure sometimes... If one of us goofs up, you're gonna hear it!

AW: Do you plan to tour again?

MM: We definitely plan to keep playing. We are doing a tour next week, july 5-15 through the midwest.

AW: What are the differences between touring as a duo, and with a whole band?

AW: Who was the drummer on the You Tube clip at Huntsville's Crossroads Music Hall?

MM: That was Kristian Svitak. We did a cover of Devo's 'Mr DNA' with him. He travels with us to play music and skateboard sometimes. Check out 1031 Skateboards.

AW: Indie rock is so open nowadays. How do you see yourselves fitting in, or not?

MM: Never really thought about it. There's so much music out there. We just want to make music we both like.

Posted by AWeiss at 1:22 PM No comments:

Mysterious Phonk: The Chronicles of

With sampled techno and electronica pieces, SpaceGhost creates a quirky, offbeat universe where almost anything goes, and almost anything is possible. The melodies are great, as are the beats. The music both flows and pumps smoothly, fluidly.

While these lyrics are profane, he is sincere about not hating people, loving women for all they are, and no homophobia. And when the profane is stripped away, as on “The Black God,” he reveals himself to be one of the smartest rappers out there. He know where he’s going, what it’s like not to have bling, and that he’s tough in ways other rappers might not be.

This debut, after many mixtapes, is good for dancing, good for doing just about anything. And good for just wanting something different than run of the mill rap.

Posted by AWeiss at 3:45 PM No comments:

I can’t get enough of this album. Hans Zimmerman and Kyle Edwards are amazing guitarists, reminiscent of the work Joe Walsh did with the James Gang; Television, and Karl Precoda of the Dream Syndicate. Vocally and lyrically, Zimmerman sounds a little like Scott Miller of Game Theory and the Loud Family, although his guitar playing is a lot more fuzzed out than what Scott played. And the lyrics also speak to frustration with romantic relationships, and “been down so long I think it’s up.”

The Young were one of the best bands on the Austin, TX comp Casual Victim Pile, while sounding like two totally different bands, as their cut on Casual was straight up 80s post-punk. The album’s title comes from a dream Kyle had about eggs, the master tapes for this album, and King Tubby’s music. That this dream sounds cosmic sums up The Young perfectly, a great alternative to the mush that is so much of today’s music, and one of the best albums I’ve heard all year.[http://theyoungblog.tumblr.com/ ]

Anyone remember the Morning Benders? Pop Ect. is the band under a new name and a new sound created by digital technology.

Musically they aren’t dreadful, just slick and processed to the point where it becomes obvious the band wants a top 40 hit. That’s not a problem. The nicely buoyant melodies, crisp production, and timely use of auto-tune and other digital studio tricks would have gotten them on the radio anyway.

Lyrically, while this is romance with a capital R, these lyrics are smart, knowing, and self-aware, which is the real saving grace of this album. And lead singer Christopher Chu’s voice is right for the radio. I had heard The Morning Benders’ last album, Big Echo, on offline radio, WXPN, and he and they sounded great on it. So even though this album can be irritating in spots because it’s so slick, it’s not bad--perfect for a pool party or anything else during the summer.

The Bravest Man In The Universe

This is a love song to God, to a person, to something. Womack’s voice is rougher and gruffer now, which suits him well, conveys an ache, a longing for something,, or for God. And longing is the lyrical theme of the album, but the closer “Jubilee (Don’t Let Nobody Turn You Around)” makes clear that he’s found whatever he is looking for.

Elsewhere, Lana Del Ray is very sultry on “Dayglow Reflection” and Gil Scott-Heron makes a joke about God from the grave. These are added incentives to a terrific comeback, and a logical move from “Stylo,” as “Stylo” is a good indication as to what was up Womack’s sleeve on this album. It is a great batch of songs.

Posted by AWeiss at 2:59 PM No comments: