Their name is Danish for remembrance or reverberation.  And their music and lyrics live up to these meanings.

Sounding like a combination of the softer side of Foxtrot era Genesis, Coldplay and on “Between the Walls” Radiohead, the music is soft and soothing, but never softheaded or trite. The lyrics are much the same, with as much content as Peter Gabriel wrote for Genesis, and Chris Martin for Coldplay.  Lead singer Casper Clausen sings of abandonment and isolation, of two souls breaking apart, but he always sounds calm and reassuring, reminding himself and anyone who is listening that while all may seem hopeless, it really isn’t, and that things will get better.

Such comforting music and lyrics usually tend to get lost in the background, but not here. In its own quiet way, this music stands out, while the lyrics could be musical therapy.  With so much of today’s music seemingly so disposable, this isn’t. which is more than good enough for me, and for anyone who cares about music that really means something. www.efterklang.net
Andrea Weiss

This review is also be a big apology to the band. After I found out during a World Café interview that they were very young, their lyrics didn’t seem silly, just normal young adult angst. Listening to their debut again, I still wished for more music though. Even I liked the music better, it was still too minimal for my taste. With their new album, Coexist, my wish came true.

The music is filled out more on Coexist. Jamie’s synth textures and drums round out their sound nicely, and point to the future. Minimal doesn’t have to be bare bones. There is also more of Romy’s guitar, and I do like her guitar playing. Its spare, warm and nothing overplayed. She is also beginning to sing like Tracy Thorn.

Lyrically, “Angel” is a bit of a red herring, It’s a rare and wonderful happy love song that isn’t sappy or solipsistic. However, the rest of the lyrics are dark as pitch, and also much more interesting. They’re still young enough so that when their first meaningful relationship dissolves for Oliver and Romy, they don’t know what to do, and try not to fall apart. That’s normal and healthy growing pains. They’re old enough now to be wiser, and more self-aware. They’re starting to take off now that they’re in their 20s. What they will sound like when they hit 30 will be breathtaking.

If you want to hear their origins, the debut is now strongly recommended. But if you want to hear an album that is anything but a sophomore slump, Coexist is equally recommended. Coexist is great, and I hope it does as much, and hopefully more, in terms of success, as their debut. The music and lyrics are there, and if you have the ears to hear it, as I do now, you will be rewarded with an excellent album. [http://thexx.info/] 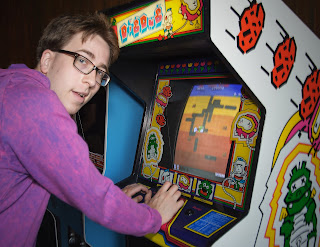 An interview with chris e. pants

chris e. pants is Chrissy Muderbot’s new side project, and it’s a good one. He grew up in Kansas City, got into music in the 90s as a rave kid, and started Sleezetone as a way to put out the music he likes. I recently interviewed him, and got the scoop on the music, and him. I thank him for answering my questions.

Chris e. pants: I've always been a huge fan of old disco tracks...I guess it started when I was growing up in Kansas City. I was a rave kid in the mid-1990s, and there were all these new house and jungle records I wanted to buy, but they were like $10 a pop and I didn't have much money, so I ended up digging in the dollar bins, which at dance shops in the 1990s were invariably littered with tons of classic disco that everybody had forgotten about. So I ended up really falling in love with disco and R&B and all the stuff that led up to house music, and it just went from there.

AW: You incorporate modern elements like house and garage into the songs. How do they fit together with this 70s disco sound?

CEP: Really, house and garage are just modern forms of disco. Everything in the world of electronic dance music ultimately comes from two sources: disco and reggae. So any time you set out to make disco tunes from a modern perspective, I guess they're gonna end up resembling house music in some ways, because house is just modernized disco!

AW: Are you a one person band, or did others help you create the music?

Who are the singers and rappers?

CEP: I am a one-person band, but I like to work with a lot of guest vocalists and stuff like that. Bubbles was my collaborator on this one.

AW: How did Sleazetone Records come into the picture?

CEP: I started Sleazetone Records in 2007 as an outlet for sleazy party music that I really feel strongly about. We've done records by Ssion, James Braun, Monkey Steak, Hanuman, Kanji Kinetic, Thunderous Olympian, and more, and this single just felt like a perfect fit.

AW: How did you get started in music?

CEP: I got started in music as a rave kid in the '90s, and from that starting point of listening to music and going to parties I started trying to learn to DJ and produce and it all just kind of built up from there.

AW: Anyone we might want to keep an ear out for?

Where The Greatest and Jukebox found Chan Marshall singing the blues with a touch of Janis Joplin-like feeling and soul, Sun harks back to You Are Free. And while I would like to say that it’s her best album ever, I really can’t because all of Ms. Marshall’s albums find her at her best, no matter what she was going through at the time. So I will say this album is as good as You Are Free.

You Are Free found Cat emerging from extreme isolation, pain, and trauma. The Greatest and Jukebox found her taking stock of her life, an interlude to get ready to embrace life, love, happiness and freedom. Sun shows how she has embraced everything, loves everything, and has put the past in perspective so she can start anew. With the same steely resolve that got her through everything she has faced. Her idealism intact, even when she was isolated, the same warmth and soul carried her along.

A few songs in particular stand out. “Cherokee,” which opens the album has an intro in her trademark guitar style, with a touch of electronica that rings out and sticks in your head. This song, like “Silent Machine,” deals with a person she has formed an instant attraction to, yet knows she cannot have. But unlike years past, where the feeling and emotion of her pain was all she knew, these two songs put this attraction in its place. She’s known all this before, but this time, she deals with it in a healthy frame of mind, and finds that she can handle it much better.

“Nothing But Time,” like “Peace and Love,” sends a message both political and personal. Embrace the future as best you can, and be idealistic, because it really is all you have. While times are hard now, it won’t always be this way. Things will get better. And if you can’t understand how to be idealistic in hard times, then you need to think some more, or just get out of her face.

You Are Free experimented with rock song structure. On Sun electronica is the way she’s doing it this time, just the way You Are Free played with rock song structure. And these songs, like “Ruin,” move in ways that flow. A driving force every bit as fierce as her lyrics. They also give her words breathing room, an interlocking form that ties everything together seamlessly. And these experiments never waste a note. Everything is exactly in place, marching in lockstep with the lyrics. It’s great, superbly played and produced, and Marshall did everything. She’s a one person band, recorder, producer, but mixed the album with the help of Philippe Zadr.

This is one of the best albums I’ve heard all year, and maybe the best. What I also know is that while I’ve always related to Cat Power, I relate to Sun the most. This isn’t meant to be a pun, but these lyrics and music have power with a capital P. It’s rare for me to hear an album with this, even as I can think of albums with just as many powerful emotions behind them. This album is a masterpiece from top to bottom, and may the sun shine on her and keep her warm, alive, free, happy and content for the rest of her life.

Zula is a Brooklyn- based indie/electronica band who‘re influenced by Elliot Smith and Neil Young. But on the basis of this song, they sound like what Animal Collective would sound as a straightforward indie rock band. I like this song much more than Animal Collective, whose songs are so soft-focused that they have no structure to them. Zula has that structure, which comes from their influences, and also add their own touch which makes something of a sound collage. Voices bubbling up in the mix, drum sounds galore, even some guitars, and it all hangs together very nicely.

Also check out “Grind is a Shuttle.” Mellow, atmospheric, with even more rock, and from an EP they put out last year. Both songs sound great on headphones, and with music this good, that means even more than it would usually. Very, very cool music.

Posted by AWeiss at 4:41 PM No comments: